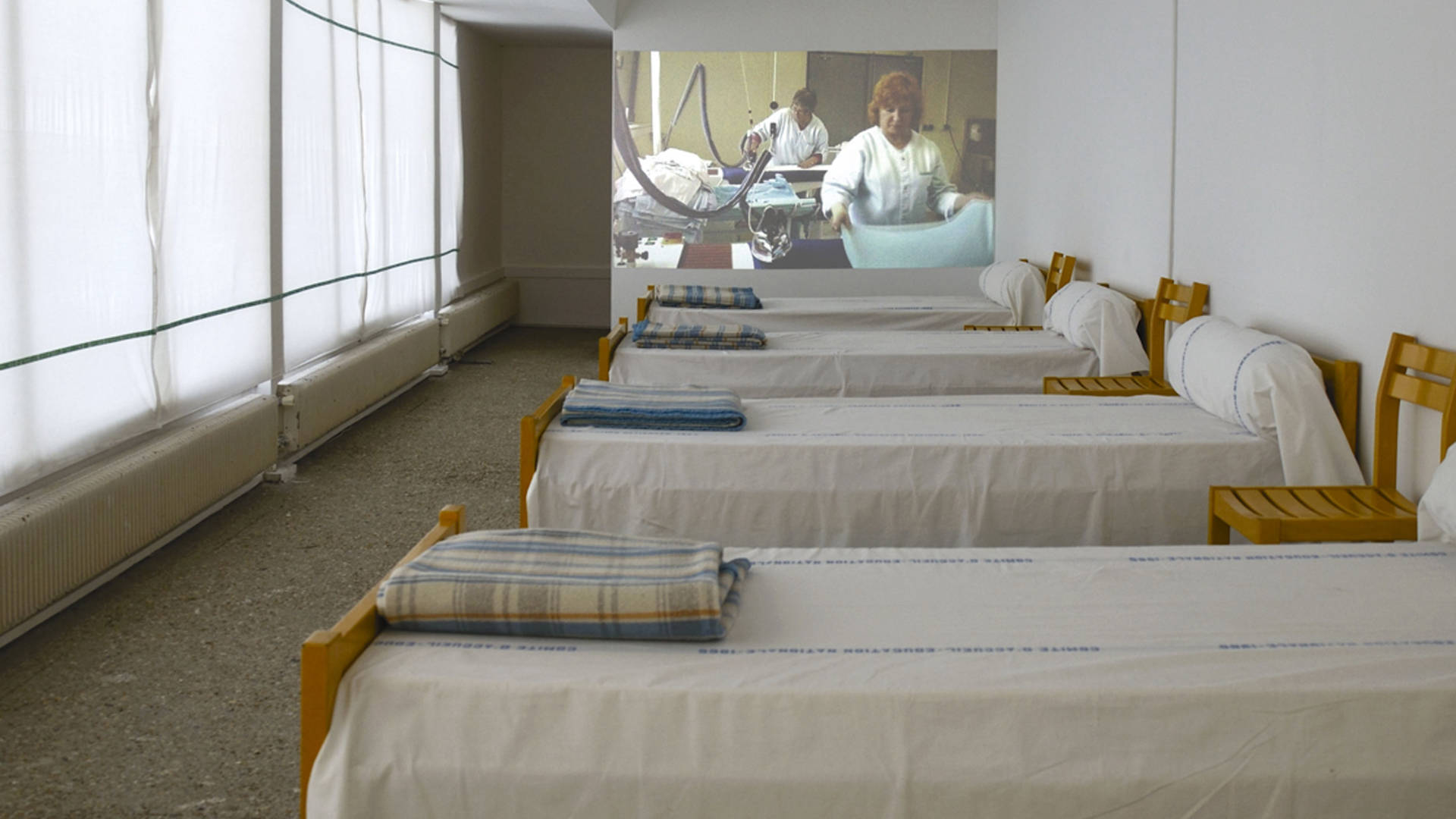 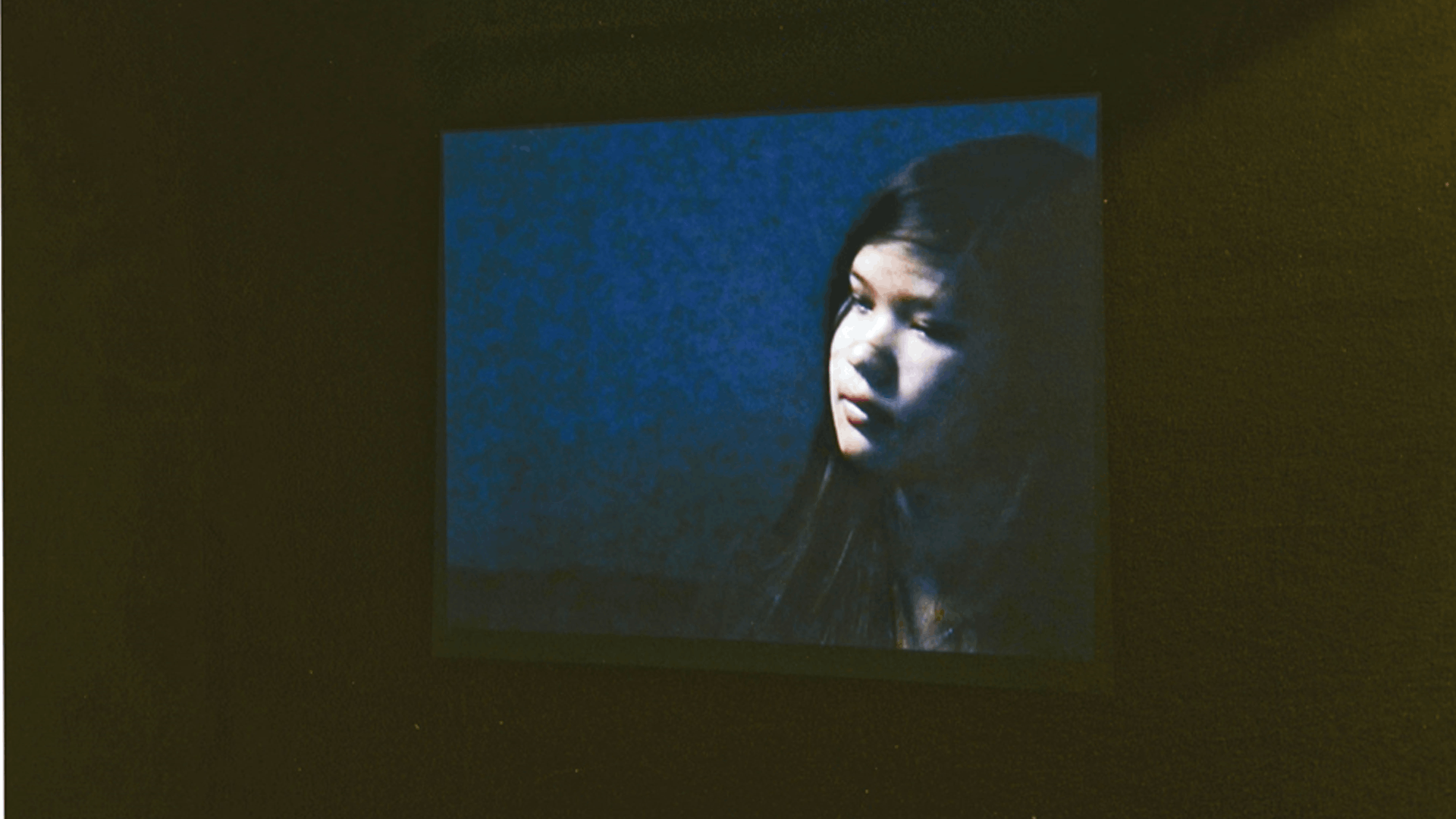 Dossier Scolaire is an exhibition at the crossroads of cinema and installation, created by Andreas Bolm and Noëlle Pujol for the Galerie du Dourven, France. It follows the residency of the two artist-directors at the high school Félix Le Dantec in Lannion in 2012.

The archives of the school as well as the school's architecture of the 1970s form the backdrop and the story of the exhibition.

The archives are interpreted and transformed into a fictional setting played by three characters, two girls and a boy. Reality and fiction, documentary approach and theatrical representation merge in the exhibition transformed into a space of experiences and adventures.

With the support of Conseil Général des Cotes D'Armor,

The Dourven gallery, an art center administered by Itinéraires Bis, has been engaged for 20 years in the production of works. Since 2011, a partnership for artist residencies in schools has been established between the Lycée Félix le Dantec de Lannion and Itinéraires Bis. Within this framework, the Dourven gallery accompanies the implementation of artistic and pedagogical projects in relation with the art teacher.

The joint objectives of the partners are to promote the meeting of the public with contemporary creation, to establish privileged links with artists, a school and the territory. For the artists, the aim is to benefit from a specific context of research for artistic purposes.

For the second edition, Andreas Bolm and Noëlle Pujol have been invited by the partners to a writing residency. The artists' willingness to use the school's archives echoes an axis of reflection conducted at the Dourven gallery. From Chateaubriand to Rosanbo by Raymond Hains in 2004, 52 interviews in the community kitchen of Ilya Kabakov in 2009, which addressed the daily life of the Soviets through his personal archives, Comices - Ville es Bret 1996- 2006, archives of the agricultural show of the canton of Plélan le petit by Vincent-Victor Jouffe in 2009, are some examples of exhibitions already presented at the Dourven gallery. In 2012, Andreas Bolm and Noëlle Pujol imagine a device designed for the space of the gallery.

The archives of the Félix Le Dantec high school, its architecture, its decor, are the starting point for Dossier scolaire. How can the archives be heard? How to give them a place to live? Taken as a score, the archival documents are read, interpreted, and transformed into a fictional staging played by three accomplice characters: Sarah Forest and Ludivine Le Flem, students of the lycée's first year and a young German actor, Dominic Stermann. Together they have taken the school as a space for cinematic adventures.
"We traveled between the third and fourth floors of the former dormitories of the high school, in the locker rooms of the gymnasium, the technological space, the old swimming pool in ruins. We have a strong relationship with the details of this place: its materials, its colors, the light and sounds that pass through it. We are seduced by the elements of furniture and objects that occupy the architecture: beds, rows of cupboards, groups of chairs, piles of sheets from the sixties... Each room is a moment of history. Each corridor can tell something... Immersed in the architecture of the school, we have recreated a daily life out of time. We imagined an atmosphere of the end of the world: between dream and reality, in a high school, a boy and two girls are caught in a paradoxical moment, between slowed down movements and accelerations. "(Andreas Bolm and Noëlle Pujol).

In the Galerie du Dourven, the spectator is invited in turn to enter into the elements of the decor that were used to make the film. Caught in a maze of cabinet blocks, the visitor wanders in the half-light in a journey close to the environment of the video game Tetris. Guided by the sounds of the film, he gets closer to the images hidden behind an assembly of red cabinets. Facing the projection, the spectator can experiment with viewpoints: sitting on the cabinets, moving around, playing with fixity and movement. Lasting 22 minutes, Dossier Scolaire is a short film in which two young girls and a boy are put to the test in enclosed spaces. They repeat gestures, start walking or running, practicing incessant comings and goings. With their eyes watching, the girls wait, exchanging a short dialogue. Sequences of sentences are read and whispered in voice-over. The speech is crossed by small betrayals. The film is broadcast in a loop, without beginning or end, it implies a suspension and dissolution of time. The action does not unfold but repeats itself endlessly. The whole film is oriented towards this end which lasts and never ends. The young man and the two girls are always in the same place.

A little further on, in a small dark room, we find the two heroines linked by dance movements. The video is composed of a series of silent sequences put end to end. The projected images of their faces, framed in a tight shot, blend into the black felt surface of the walls.

In a narrow corridor, a large format digital pigment print on dibond (120X176cm) is hung on the wall. The granite frame of the doorway gives a monumental aspect to this object diverted from its original support. One must take a step back to be able to decipher the enlarged green letters of this apology note from the high school archives: "An untimely power failure last night did not allow my daughter's alarm clock to ring last night. So she is late this morning. »

Another space to experiment. The panoramic room of the Dourven is transformed into a dormitory. A set of yellow beds and chairs is lined up in front of the large bay windows covered with white sheets. A thin green border printed on the sheets indicates the year of the trousseau: National Education, 1966, 1967. In this "bright room", the spectator can sit or lie down on the beds. The scenic device is conceived as an extension of the projected image. The sound dimension of the installation contributes to the transformation of the physical experience experienced in this space.
Filmed in a fixed, frontal shot, the projected image shows us a work scene recorded in the high school's laundry room. In front of us, two standing women are at the controls of two ironing tables. They hold an iron in their hands, which in turn spits and blows steam.